Over the last week I’ve read Colin Woodard’s “American Nations - A History of the Eleven Rival Regional Cultures of North America”. This book was absolutely fascinating. The author’s hypothesis is that the original cultures defined when the first settlers arrived in the new world continue to largely define modern North American (he covers what is today the US, Canada and northern Mexico) politics. He makes his case compellingly and does an excellent job of mixing the detail and anecdotes that make the reading enjoyable while also maintaining the overall macro perspective.

I’ve lived outside of the US for 15 of the last 20 years, but I grew up all over the US (North and South Carolina, Texas, Oklahoma, New Jersey, Illinois), I can definitely confirm that there are deep differences across the regions (a few years back my wife and I went to the San Luis valley in southern Colorado which was absolutely mind blowing in terms of cultural difference - it was like a time machine to the days of the Spanish conquistadors). 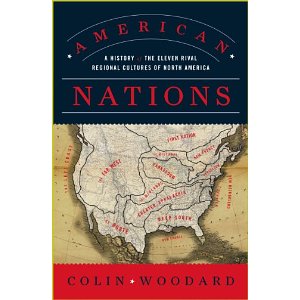 Most Europeans I meet (and indeed many Americans) are increasingly worried about how American culture will respond to the realities of the “post-American world”, especially as US government seems to become increasingly dysfunctional. This book does a good job of examining the powerful cultural currents at work behind the scenes. Frankly it’s easy to get depressed when you look  at US politics these days, but it’s also good to remind ourselves that the cultural wars have been fought (sometimes physically) for literally centuries and things have worked out all right. That doesn’t mean that there isn’t an increasingly large percentage of US elected officials that scare the living bejeezus out of me.

Amongst much else I enjoyed that it addressed one question that has always interested me - why during the American Revolution the “other” colonies, ie those that went on to become modern day Canada didn’t join the 13 that become the United States. If there is one weakness it’s that the author doesn’t really take on the (admittedly difficult) challenge of speculating about what the future holds.

Nevertheless it’s a great read if you’re at all into US history and social politics in general. I would love to find a similar book about the interplay of the various regional cultures of Germany, the other culture I’m familiar with.

Now that I’ve read it I’m giving the book away to any of my friends on Zesta Punta - I recently added a feature that you can specify who you want to share with: friends, friends and friends of friends, or anyone.

Next up I’m planning on something a bit lighter - my friend Lloyd Shepherd has a new book out “The Poisoned Island”. His last one was a good read so I’m looking forward to it.