Welcome back to the old blog. Aside from the occasional photo, it has been a long while. Much has happened, we sold Lokku to Mitula, and I’ve moved to Barcelona. All of that will be covered in upcoming posts, today I want to write about a company I recently made a seed level investment in: GetAgent.

Based in London, GetAgent helps homeowners find the best estate agent for selling their homes. If you’re thinking of selling, you should check it out, they will save you a lot of money.

So, why have I invested? First up, the fundamental rule of early stage investing is that the investment is in people much more so than a specific product or technology. One of the founders of GetAgent is Peter Thum-Bonanno. Peter was also the founder of FindProperly, which we (Lokku) bought last year, which is how I came to meet and work together with him. Peter is CTO of GetAgent, and my investment is fundamentally a bet that he and the other founders have the skills and perseverence to build a compelling product and a viable, thriving business. Happily they are so far off to a great start.

Nevertheless, my reason for investing in GetAgent is not solely just my conviction that Peter is a smart, hard-working guy. Having spent the last nine years in the online real estate lead generation business, I have some confidence I know the space well. Services like Nestoria work very hard to generate a high volume of well performing demand-side leads for their clients. That has a lot of value (as an aside, you all saw that the Mitula Group IPO happened right?), but in some markets supply and demand are so distorted that it’s unclear whether there is major need for demand side services. There are just not enough houses/flats, and a huge number of people who want to buy/rent them  (be it to actually live there or as an investment).

If you have a reasonable place in London you will be able to sell it, the only question is at which price, how quickly, how much effort it will take you, and what sort of fee you will pay to an agent. Similarly, last summer when we lived in Moabit in Berlin, walking down the street I would often see signs put up couples offering finders fees to anyone who could help them find a place to rent in the neighborhood. I can remember years ago in Munich the intense frustration of trying to find a place, arriving at viewings to stand in a line with 40 other people. In these markets, it’s not clear that demand generation services are particularly helpful to sellers. When you have 40 people in your viewing line, do you really need (and want to pay for) to get number 41? GetAgent focuses on the opposite side of the problem, which is why I find it compelling. They help owners in a high demand market (London) get the best deal when they sell. They help agents by generating high quality leads, helping to avoid time wasters. 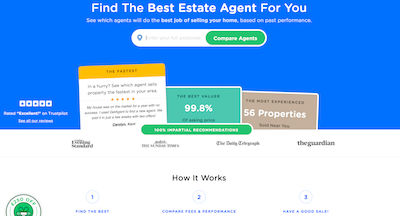 The service is still in beta, but initial response from both sellers and agents has been very positive. Still, most start-ups fail, and getting people to change their traditional behaviour is hard, particularly in real estate. It is a very emotional category. Numbers and logic are not always the key drivers of decisions, no matter how compelling the proposition, and despite being the largest financial transaction of most people’s lives. So far though the GetAgent team is working hard (and more importantly, working smart), and they are off to a strong start. I’m delighted to be an investor.

Learn more about GetAgent by following them on twitter @GetAgentUK.