Eight years ago I had just graduated from MIT and moved to London with the intention of setting up my own start-up.

Several things boggle my mind when I think back on it. First I can’t believe it’s been eight years. It’s gone by so fast. If you want to get into a time machine I can highly recommend starting a company and becoming a parent. Years pass in a blink.

Second, while we haven’t created the next Facebook, Lokku, the company I co-founded in 2006, a few months after getting to London, is thriving. Our most well known brand is Nestoria, a search engine for residential property. We just launched our second brand OpenCage Data. Meanwhile #geomob, the quarterly event we run for location based service developers is going great (as an aside - you should come to our next one in October, here’s a summary of what went down at last week’s mob).

In short, London has been very good to me.

I write all that not just because I’m very proud of what we’ve created (I am), but also because I wanted to reflect on an odd paradox.  On the one hand we have a challenging time filling our open engineering roles. On the other the EU is full of countries with high unemployment, particularly for young people.

Over the last seven years one of the key contributors to our success has been offering paid internships to young students and recent graduates. Over the years we’ve had about 30 people come through the program. Some have been in our product team, primarily native speakers of all the languages on the countries we serve (eight countries with six languages). But most have been developers, Lokku is very much an engineering organization.

We look for a few things in these potential hires - desire to work hard, general intelligence, web savviness. We don’t expect people to be experts at any particular technology or to have a lot of professional experience, though they should have familiarity with working on the command-line. If you want the full details of our offer please see our jobs page.

We spend a lot of time and effort training our team, both formally and informally through events like our weekly tech-talks, where someone presents their project. We’re a small, international team all sitting in the same open office, you get exposure to all parts of the business, and e have lots of interesting engineering challenges - often made more interesting by trying to tackle them in a maintainable way with a small team. From day one new employees are working on critical projects and committing to the production code base of a service used by millions of people a month. There’s a lot of freedom to suggest new ideas.

After their time with us, team members have gone on to return to academia, start their own start-ups, or join “big” internet companies (or indeed to rise within the Lokku ranks - several people who joined us straight out of university now hold leadership roles). I do my best to help anyone who leaves on good terms, which has been the vast majority. Unanimously people have told me how much they’ve learned - about software, about running a real web business, and about life. As a founder one of the things that has given me the most joy has been watching people come in and thrive and learn. Every few months we have a team celebration and I always make a point to invite back all the alumni. Not all are still in London and not all can make it, but it’s great when they do and we see them thriving, at least in some part due to the skills they gained at Lokku.

So overall I think our total package of interesting work, with an interesting team, in a good location is compelling - and this has been reinforced by most of those who have taken advantage of it. My question is why are we not seeing more applications from developers in countries hit by the crisis? One of the best things about the EU is the freedom to travel and work where you like (if you don’t believe that ask anyone who doesn’t have that freedom). If I were an ambitious, hard working graduate in a country like Italy or Spain I’d come to London for a few years - meet great people, learn a lot, make some money, and perfect my English. And then take those skills and connections onward in life, be it back in my home country or elsewhere. I’d love nothing more than to hire such a person, be it as an intern for 6-12 months or full time for a few years.

How can we at Lokku better reach these people and present our offer?

One final point - please don’t interpret this post as that we’re only looking to hire foreigners. Most of our engineering team has British passports, and obviously the key criteria is technical skill. We will gladly hire any qualified applicant (that being said, native fluency of a natural language of one of the markets we serve is a great skill to bring to our team and will definitely make you a more qualified candidate), this post is more about why we don’t see London flooded with great Spanish, Greek, Italian, Portuguese, etc developers? What keeps them from coming?

I close with a picture of the Lokku team taken in late 2012. My thanks to everyone who has helped Lokku thrive over the last 7 years. 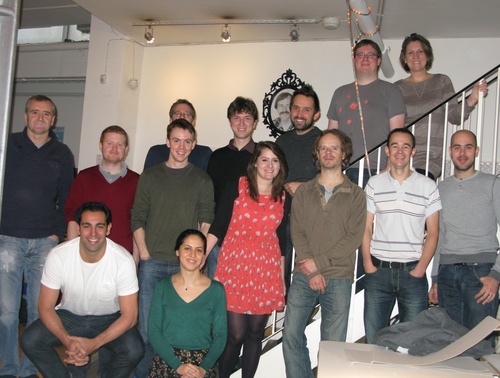