A few weeks back, on the 21st of Februrary to be exact, the UK government announced there will be a referendum about leaving the EU. Though I no longer live in the UK, I write these thoughts on the referendum as an EU citizen who spent the last 10 years living there, my two children were born there, and a few years ago my wife got UK citizenship.  While in the UK I (with another non-UK EU citizen) started a company that received foreign investment, employed and trained about 60 people (over the course of the 10 years, not all at once), and built a small, but global, business. I have paid my fair share of tax - and far more than any person’s fair share of rent - in the UK, I experienced the pleasure and pain of the NHS, I celebrated the Queen’s jubilee, I am an investor in about 10 different UK businesses, etc. I of course don’t have the chance to vote in the referendum, but nevertheless wanted to briefly express my view.

One of the frustrations with the discussion around a big decision like the referendum (or the Scottish referendum the year before, or the discussion about Catalan independence here in Barcelona) is that both sides produce all sorts of numbers to argue their case, and it is utterly impossible for the layman to know what to believe. There is endless discussion and debates about various “facts”, most of it entirely unprovable. For the record, I do believe leaving the EU would be bad for the UK economically.

For me though, the date of the announcement of the referendum served as a great reminder of why we need the EU and why you should vote to stay in. February 23, 2016 was the 100th anniversary of the start of the battle of Verdun, one of the most brutal battles in human history, with close to a million casualties. In the UK, Verdun, because the battle featured Germans versus French, is overshadowed by the Somme, as a metaphore for senseless loss of life. Historians no doubt have a many a drunked argument about which was worse, but no doubt they were all horrific, as were many, many other battles in which Europeans killed other Europeans. I spent part of my childhood in Germany, growing up not that far away, and had the chance to visit Verdun a few times. If you can you should go, there is no other way to comprehend the utter scale of it. Even today huge stretches are still fenced off as they are too full of bombs. 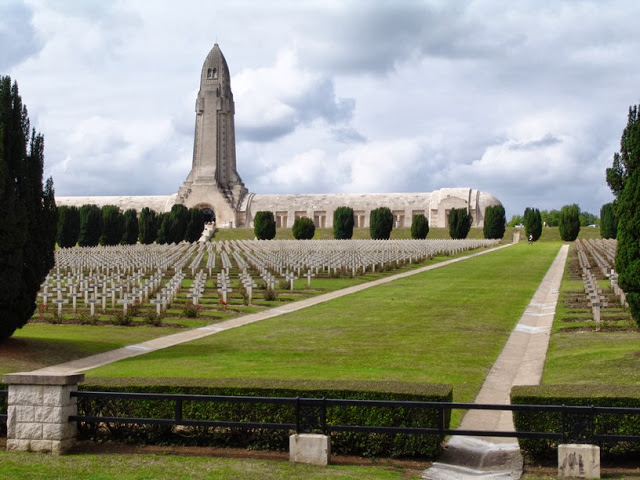 The cathedral like building in this picture is one of many memorials in Verdun. It is the Beinhaus von Douaumont, it contains the remains of 130,000 people. Think about that for a sec.

We’re very fortunate that most modern Europeans never had to live through a catastrophic war, and we forget that it used to be totally normal for there to be a massive war between European countries once a generation. Or that the country I now live in, Spain, was a dictatorship in living memory, and indeed most of eastern Europe much more recently than that. That is why we need the EU, and why we all need to be in it and continually working to improve it. So we don’t drift apart and fight, but rather so we work together to improve. The temptation to slide back into “us vs. them” thinking is always there - as we see most recently with Trump in the US, or many other examples. Working together is hard work.

Many people, especially in the UK - but by no means only there, like to criticize the EU. Fair enough, that is their right. But we also shouldn’t forget what amazing progress has been made only in the last 30 years. Not only should we not forget it, we should celebrate it wildly, especially when we look at where we were only 100 years ago. More needs to be done to make the democracy in the EU more transparent, and probably many of the current systems and ways of working will need to change. The same was the case when the US started, and indeed any participatory government is always going to be a work in progress. So let’s do that work. But let’s not drift apart.

If you have the chance to vote in the referendum, please vote to stay. Let’s work together to create the EU we want.

BTW - if you want to learn more about Verdun and WWI in general I highly recommend Dan Carlin’s Hard Core History podcasts on the topic. They have been a great treat for me over the last few weeks. Foto by Leon petrosyan - Own work, CC BY-SA 4.0. Thanks Leon!