What a week! I arrived in Delhi, spent three nights there, then two nights in Mumbai, then two nights in Bangalore. Along the way we had 13 meetings, spoke at one event. Frankly it was a whirlwind that I’m still trying to digest, the one key theme though was that there is a world of opportunity in India and we need to spend much more time on it. I really wish the logistics of my life let me go more often. 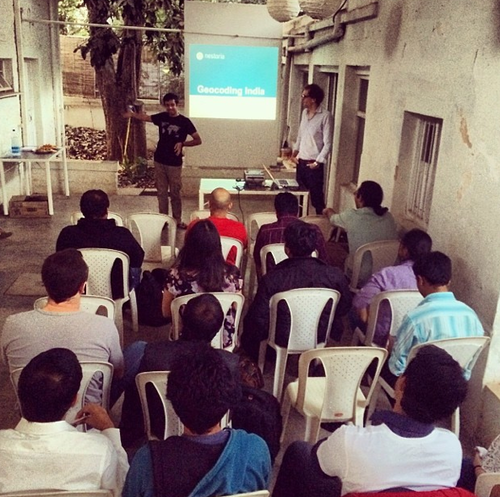 I talked about the many challenges we have with geocoding Indian addresses, how we nevertheless try to do it, and that we hope to soon open our geocoder to the world with an API. More on that soon. The talk was well received, but most rewarding about the night as the chance to e to meet a lot of great people. There are lots of people in BLR doing cool geo things, and I really hope they’re able to build the momentum around meeting that we have in London with #geomob.

Overall the week was exhausting but also immensely refreshing. Great to be with good people, great to meet lots of new people, great to be “in the field” learning, great to be in the warmth and sunshine after months in the London gray, and, though I love them dearly, great to have a week off from kids. I left my son in Germany with his grandparents and to both party’s surprise they survived and thrived.

If the week had any downside it was that I got zero exercise. But that is a topic for next week. Can’t wait to get back to London and dive in. I am recharged.